What the hell is a Swampy Sloth? 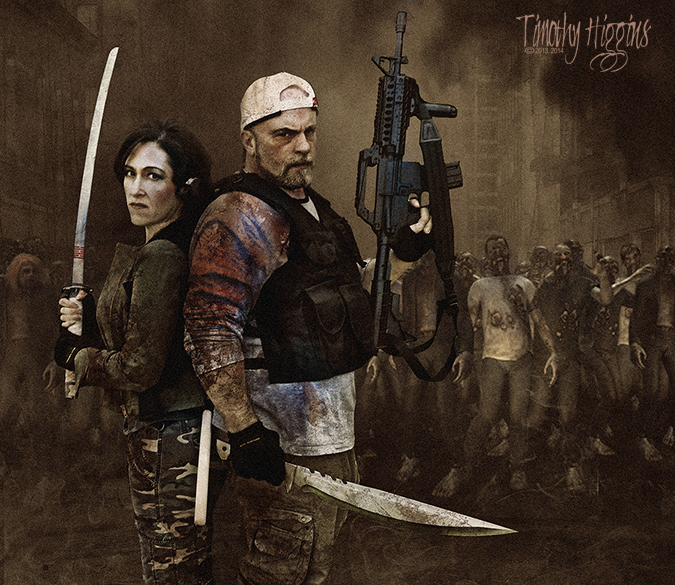 The artist currently known as Timothy Higgins is a somewhat mentally stable redneck nerd from
the great state of Louisiana but not much is known about his past life...
there are many rumors on how he got his start in art but no one is really sure
which ones are true or just vengeful speculations on the part of his most hated enemies.

Some say that he was a simple mild manner comic book store owner that ventured in the deadly world of illustration because of his love for comics and role-playing games...they say, it was that experience that forever warped his mind and he never has fully recovered...

There are others that say he was a former disgruntled fast food manager who got fired by his district supervisor for drawing pin-up girls on paper napkins and stealing pickles off customer's sandwiches.
There also are many people that will swear up and down that he worked in the video game industry for many years. Smearing his good name by saying that he worked on over thirty published titles. Weird tales of him are whispered in dark places, of him, working with actual Mig-29 Russian Pilots and with such famous people like Bruce Campbell (Actor of the "Evil Dead" fame.).

Among the most outlandish stories are... that he actually worked under music producer Bob Ezrin, and Saxophonist and rhythm guitarist for Pink Floyd, Scott Page producing video games. Some of the supposedly popular game titles he has worked are: Harvester (In which he allegedly played the Chess Master character), Tachyon: The Fringe, BloodRayne,
Doom, Need for Speed, Tony Hawk and Guitar Hero, just to name a few.

Depending on the economic status of who you ask....you might be told that he once was a homeless derelict in a small Texas town...till one day, according to several of his hobo friends, after praying to glowing floppy disk, a mysterious light from the sky "beamed" down an old Amiga computer, which he then used to turn his life around by teaching himself computer graphics.

In some criminal underworld circles Timothy still has a ruthless reputation for doing architectural/interior design visualizations as well as kitchen cabinet designs for the mob and other dark entities.

Disclaimer: Please do keep in mind that none of these rumors or stories or "facts" can be wholly confirmed as most of the witnesses to his past are mysteriously missing, dead or presumed to be dead.

Here is what's known.... A few years back he met his future wife Lindsey who was so impressed and moved by his talent, that along with his wife’s love, support, and a fair amount of nagging, decided to create Swampy Sloth Studios to start selling fantasy Cajun/Creole themed art projects and prints. Using both traditional and modern digital techniques, Timothy endeavors to create one of a kind pieces that embody the spirit of Louisiana.


Timothy currently lives in a spooky part of northern Louisiana along with his wife, one cat, two dogs and an plethora of comic book/horror memorabilia, weapons and other strange occult artifacts.